Luca Francioso, born on May 19th, 1976 in Reggio Calabria (Italy), is a guitarist, a composer, and a writer. He started studying classical guitar in 1987 with Giuseppe Alati. In 1996, he became interested in Fingerstyle, a technique that he perfected in 1997 with Franco Morone.  He wrote his first short stories in 1991. He lives and works in Padova, where he performs, runs guitar courses, and manages an intense music and literary production company.
«Besides being one of the most gifted acoustic guitarists, Luca Francioso is also a creative and cutting-edge talent. He loves trying his hand at different forms of expression.»
http://www.lucafrancioso.com
Buy Luca’s music on iTunes!

BACK TO SCHOOL SPECIAL!

For A Limited Time 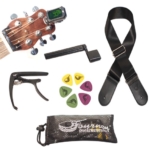