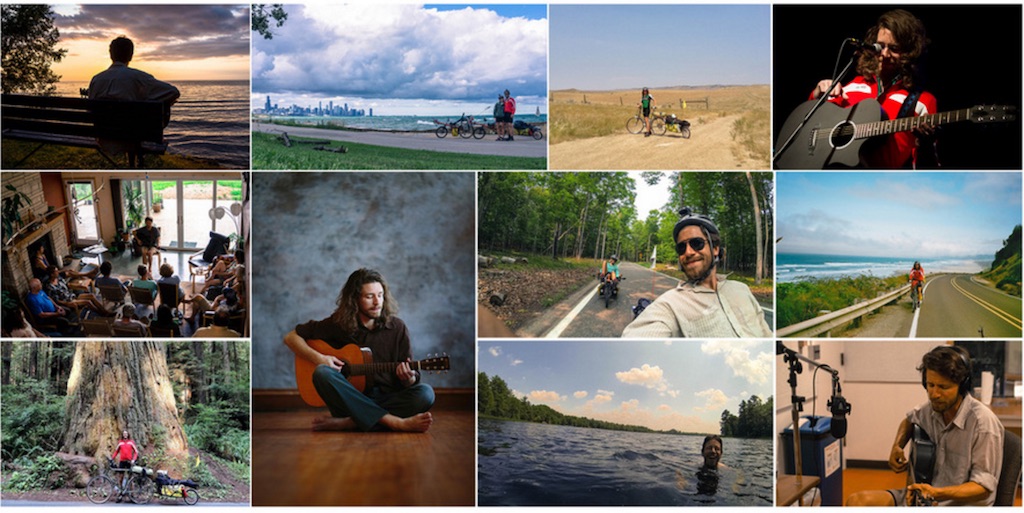 Posted in Artists
by robPosted on June 3, 2016
Born in rural Minnesota and raised in Minneapolis, Paul Doffing grew up enamored with the acoustic and electric guitar, sang in his school’s choir and took music classes throughout his schooling . At the age of 12, armed with a pawn shop classical guitar that his father helped him tune, Doffing began playing along with Creedence Clearwater Revival’s Born on the Bayou, deciphering the guitar part by ear. Playing be ear quickly became Doffing’s preferred method of learning to play the guitar. Over the next decade he explored rock and roll, blues, British and American folk music, finger-style guitar, jazz and classical music.
After high-school, Doffing started a rock band called Citizen Sage. In 2009 the four piece released Citizen Sage, a 9 track psychedelic rock album which hit the CMJ Charts at #14.

In 2012 Doffing released his first full length solo album, Blossom is You. Through Kickstarter, Doffing funded his first Freedom From Fuel Tour, on which he promoted the album on bike for 6 months, pedaling 5,000 miles, and playing over 30 shows across the U.S. He also promoted his next album, Paul Doffing, by bicycle, covering 2,700 miles, playing 45 shows, and partnering with 350, Cool Planet and Citizens’ Climate Lobby along the way. During these trips, Doffing fell in love, became severely ill, and was cut off from eating any more pasta at an all-you-can-eat pasta buffet and he left the smallest carbon footprint of any emerging artist today.
His new album, Songs from the (quaking) Heart, examines the process of finding peace in the midst of the whirlwind of challenges that are present in modern life. His style, which has been dubbed “acoustic impressionism”, blends instrumental elements akin to guitar maestro Leo Kottke with intimate and articulate songwriting in the vein of Neil Young. Songs from the (quaking) Heart was informed by the work of Mahatma Gandhi, Thich Nhat Hanh and the writings of ancient Zen masters.
In May 2015, Paul once again canceled his lease, relinquished his possessions, and set off; this time on an international bicycle-music tour that will last for several years. He’s traveling the world with his partner Jen and holding performances along the way. His unique tour has created a reason to hold perforances in non-traditional spaces, including outdoor shows at farms, in houses, in city squares, and even at a rural apiary near Lake Superior. By choosing to pedal his bicycle, to see the world with his own eyes, and to sleep under the stars, Paul is forging a path into the wilderness of the music industry. But, as the Tao says, “A good traveler has no fixed plans and is not intent upon arriving. A good artist lets his intuition lead him wherever it wants. A good scientist has freed himself of concepts and keeps his mind open to what is.”
Learn more about Paul:
Website: http://www.pauldoffing.com/
Facebook: https://www.facebook.com/pauldoffing/
Youtube
Instagram: https://www.instagram.com/pauldoffing/
Itunes