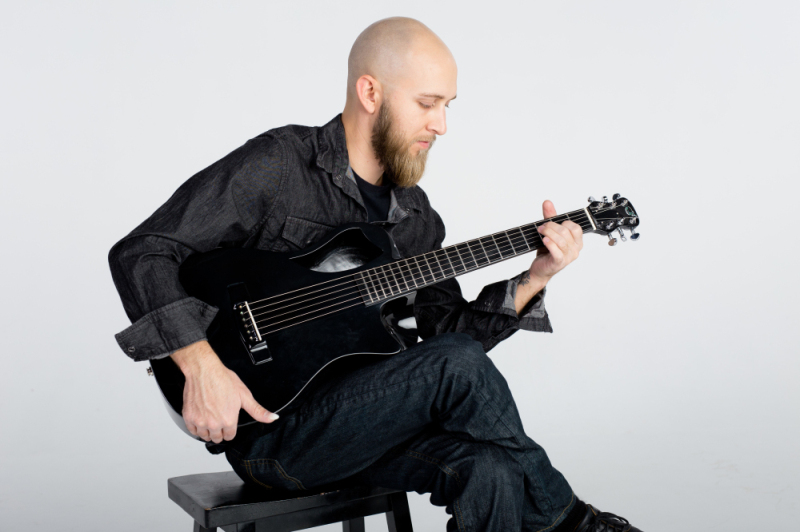 Posted in Artists
by robPosted on January 18, 2017

Aaron Edward is a Guitarist and Composer from Tulsa, Oklahoma who creates transcendent, instrumental music that transforms soulful melodies, harmonies, and rhythms into vivid, emotion-charged imagery. As a gifted fingerstyle player, his fine-tuned technique enables him to make one guitar sound like an orchestra. His artistry dazzles in mesmerizing recordings and performances, which establish him as an engaging storyteller, able to channel both grit and heart through each note.
Aaron grew up surrounded by music and learned to love many styles and textures. After taking piano lessons as a young child, he felt drawn to the electric and acoustic guitar. His mother filled his home with a steady stream of acoustic folk and new age albums from the Windham Hill record label. When he commandeered her guitar, he discovered the joy of strumming and his natural sense of rhythm as he began to experiment with melody and chords. He got his first guitar at age thirteen and collaborated with other musicians and songwriters in rock bands throughout his teens until he decided to commit to forging his own path and go the solo route as his songwriting and fingerstyle techniques flourished.

Now fresh off the release of his first solo album, Aaron’s unfaltering work ethic and dedication to evolving his musical craft moves him to continue dreaming up new material and pushing the boundaries of the guitar. Aaron is proud to say he is signed with the prestigious FRETMONKEY Records. Aaron is endorsed by Stonebridge Guitars, Vellone Guitars, Eastman Guitars, Journey Instruments, K&K Sound, MONO Cases, and John Pearse Strings. He released his first solo album, “Akasha”, in June of 2015. He is currently filming a series of studio and cinematic music videos in support of his second album, “Cavenaut”, and writing songs for his third album.
More info:
Website: http://www.AaronEdwardMusic.com/
CD Baby: http://www.cdbaby.com/cd/aaronedward
iTunes: https://itunes.apple.com/us/album/akasha/id1021219139
Facebook: https://www.facebook.com/aaronedwardmusic
Instagram: https://www.instagram.com/aaronedwardmusic/